A Day of Gardens

With another fine day of sun, a cloudless sky and soft breeze, today's explorations around Kent centered on formal gardens.
The first stop was Groombridge Place Gardens, dating from the 17th century, with many walks, gardens, and trails to explore around a moated 17th century manor house (close to the public). The estate belonged to British barrister and architect Philip Packer, a courtier to Charles II, built the present day house with the help of his friend Christopher Wren in 1662.
Packer laid out the gardens surrounding Groombridge Place from 1674 with the help of horticulturalist and famous diarist John Evelyn who designed a series of formal gardens arranged as "outside rooms" of the house.  The idea was to blur the boundary between indoors and outdoors which is a theme which became popular again in the twentieth century.  Some of the garden rooms at Groombridge also pre-empted modern design in creating an artfully "natural" landscape. Sir Conan Doyle was a regular visitor to Groomsbridge in the 18th century to take part in seances, his favorite garden being the Drunken Garden, called so because of its odd shaped hedges. He set the Sherlock Holmes mystery "The Valley of Fear" in the manor house.
Among the formal gardens is a Secret Garden, behind a thick wooden door with a stream flowing over rocks and a bridge under a large mossy tree. It was supposedly in the Secret Garden that Packer died while reading a book in the sunshine on Christmas Eve in 1686
Next on to Penshurst Place, which has been owned by the Sidney family since 1552. Built in 1342 for Sir John de Pulteney, a London merchant and four-times Lord Mayor of London who wanted a country residence within easy riding distance of London. The original medieval house is one of the most complete surviving examples of 14th-century domestic architecture in England. After passing through the ownership of two of Henry IV's sons, Penshurst Place stayed in the crown estate for the rest of Henry VIII's reign. He used it as a hunting lodge until he gave it to Anne of Cleves in their divorce. The house and grounds was by Edward VI to his loyal steward and tutor, Sir William Sidney. Penshurst Place was the birthplace of the great Elizabethan poet, courtier and soldier, Sir Philip Sidney. In 1599, Queen Elizabeth I first visited Penshurst Place. One of the State Rooms in the house has been named after her, since the Queen would have used it to give audience on one of her many visits to Penshurst.
The gardens span 48 acres and include numerous uniquely designed gardens, such as a Union Flag Garden, formed from roses and lavender, the Flag Garden was opened by the Prince of Wales to mark the 400th Anniversary of Sir Philip Sidney's death in 1984. Opening directly in front of the House, the 16th-century Italian Garden is designed to be enjoyed from the State Rooms. The colossal project of Sir Henry Sidney in the 1560s, it is the centrepiece of the Garden and sets the style for the whole, with an oval lily pool and classical statue at its centre.
A rose garden: 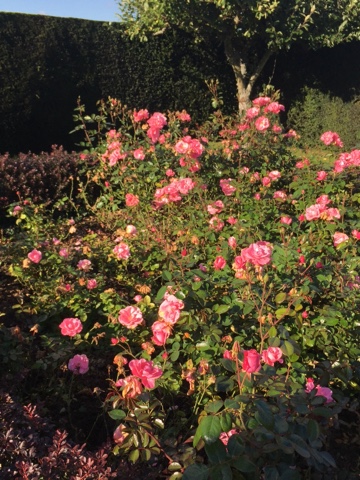 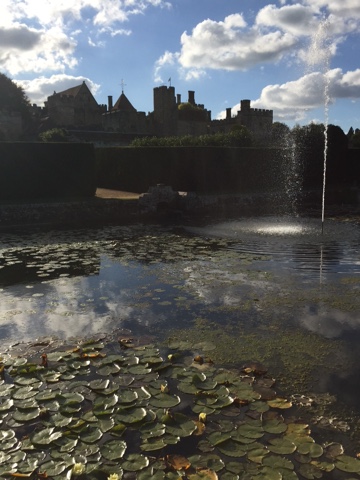 It is not known who named it or why, but Diana's Bath was formed from an old mediaeval stock pond. Parapet walls were built around this in the16th century with steps added which descend into the water, often filled with lilies of all colours.
Posted by an accidental annalist at 4:50 PM